The history of the Forssa Region Crafts and Industries Association

On 29 March 1947, some 40 craft and small industry owners gathered in a meeting to discuss establishing an association to look after their interests. As a result, the Forssa Region Crafts and Industries Association was established and it immediately joined the National Central Federation for Small Industries. The association initially had 19 members.

Its original purpose was to serve as a shared forum for the members and to support their professional, financial and social pursuits. The first chair was Tauno Savikko, with Arman Palmén as secretary.

In 1950, the association organised a trade fair at Forssa theatre, in collaboration with Forssa Merchants’ Association. The fair ran for seven days and was visited by 12,133 paying guests. At that time, the population of Forssa was 8,698, so the number of visitors hugely exceeded the number of local residents.

In the 1960s and 1970s, the members of the association changed considerably and at that time, joining entrepreneurial organisations was not popular. The association was all but dormant until 1976, when it experienced a revival. On 1 July 1976, local entrepreneurs were invited to an event at the Hotel Koskenniska, where the President of the Central Federation of Small Industries, Tarmo Korpela, spoke. The association’s work was restarted, more active than ever. Training events, happenings, members’ meetings and trade fairs were organised. Representatives of the association participated actively in national and regional ogranisations.

A major project was the summer event in 1981, when the Forssa Trotting Track hosted a fair with nearly 100 exhibitors. The number of visitors at the fair was close to 15,000. The Central Federation of Small Industries held its annual general meeting in Forssa in 1982. This event, too, was a major undertaking for local organisers. Volunteering and participating in the association’s many activities is inspiring.

The year 1995 brought with it a wind of change, and the Finnish Entrepreneurs and Central Federation of Small Industries joined forces due to their many overlapping interests. The members of the Forssa Craft and Industries Association were invited to join the larger Federation of Finnish Enterprises. However, a number of established businesses chose to remain as independent associations despite the reorganisation in the field. The Forssa Crafts and Industries Association was one of such association. In the 2000s, the association kept a somewhat lower profile and operated with closed membership until 2007. The members decided then that the association was still necessary and worth reviving, as it provided an important forum for local businesses and entrepreneurs. Now, the association has been regenerated with a growing, active membership and a bright future ahead. 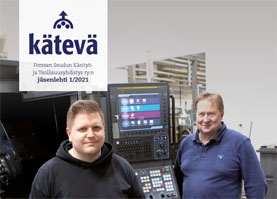 KÄTEVÄ is a magazine edited by the association and published twice a year. The magazine introduces member enterprises and their key competencies and activities and provide useful information for entrepreneurs. The magazine is sent free of charge to all businesses in Southwest Häme region.